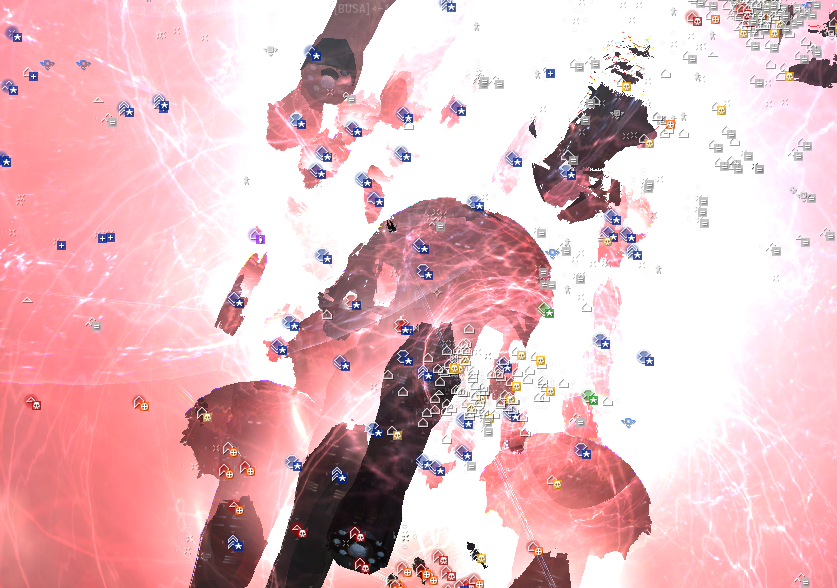 TEST and Snuff joined to assist their friends in CO2, whilst Northern Coalition (NC.) joined to help PL.

What initially appeared to be a sub-cap fight quickly escalated to a full scale epic battle.

As of 19:46 eve time, NC/PL appear to have upper hand, with NC. jumping in and committing their supercaps to the fight, and local spiking to around 1800, NC and PL have a number of titans on the field, with doomsdays lighting up the system, and CO2 moving their titans off the field to try to save them. TEST appear to be taking heavy dread losses whilst CO2 are moving out.  At the time of reporting, 15 titans are tackled on field, and Pandemic Horde (PH) are enroute to lend additional firepower to NC/PL, but are still several jumps out.

We will have more in-depth reporting on this story as it develops, and in the aftermath, but for now, it seems that the loose coalition forming in the north of CO2/Snuff/TEST has taken a heavy hit and appear to be trying to salvage what they can from this. UPDATE: 21:22 – Minor subcapital skirmishing continues in the system, but the heaviest fighting has ended.

21:05 – Fighting has largely wound down as NCdot begins to loot the field. Pandemic Legion is celebrating on comms with the Imperium’s Jay Amazingness.

20: 55 – NCdot have turned their guns on the Imperium Cerberus fleet under Asher Elias. Neither side objects to this arrangement.

20:27 – The third CO2 titan has been killed, and others are beginning to extract. Three have escaped so far.

20:20 – A second CO2 Titan has died, and a third is slowly being ground through the TiDi

In the thick of the fighting, Pandemic Legion’s Elise Randolph tweeted the following:

UPDATE II: With the fighting over, reports are coming in that CO2’s GigX has declared the engagement a victory for CO2, on the basis of ‘saving’ four of the titans CO2 dropped onto the field.