Artillery in World of Tanks: Where is it now?

Artillery in World of Tanks is a hotly debated game feature. Some sections of the community detest these vehicles, claiming that they punish players pushing down open flanks, whilst other sections of the community love artillery, saying it prevents camping and provides an effective counter to hull-down heavies and tank destroyers. With the recent 9.18 patch that has been launched in World of Tanks, the debate has exploded once again about the best course of action to take regarding this contested and controversial mechanic.

So, what happened to artillery in the 9.18 patch?

For this comparison, we’re going to look at the T92 HMC Tier 10 American artillery piece. With its huge 240mm M1 howitzer, it possesses the largest calibre gun in the entirety of World of Tanks. Now, let’s compare this artillery piece as it was in 9.17.1 – the previous patch – and what it became in 9.18: 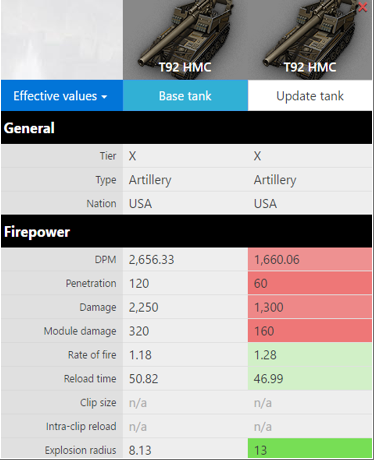 On the left, we have the 9.17.1 T92 HMC, whereas on the right we have the 9.18 T92 HMC, courtesy of the amazing website tanks.gg. Immediately, we can see that the 9.18 version of this artillery has had a massive downgrade to its DPM (Damage Per Minute) – Dropping by just over a thousand. The penetration of the standard HE (High Explosive) shells on the tank has halved too – down from 120mm to 60mm, meaning it may now have more trouble penetrating the roof of higher tier vehicles. And below that, we can see the cause of the DPM decrease – it’s damage per shot has been decreased from a meaty 2,250 damage (able to take out 2/3 of the health of the Maus super-heavy tank in one shot), to a relatively low 1,300 damage (about the health of a Tier 8 medium tank). The alpha of this tank has been almost halved, and whilst the rate of fire has increased, it’s not been increased nearly as much to compensate for this damage nerf.

However, there are positives to this situation. The explosion radius of the tank has been almost doubled, going up to 13m from 8.13m pre-patch. This is due to a new feature that has been added to artilleries with a gun calibre of 155mm and above – stun.

As of Patch 9.18, artillery in World of Tanks has a new mechanic which enables it to stun the crew of an enemy tank. The increased explosion radius is the radius in which a tank will be stunned if an artillery shell lands within that radius. The explosion radius within which a shell will do damage is still the same as it was in 9.17.1 – the extra radius is stun damage only, as this diagram from the forums illustrates: 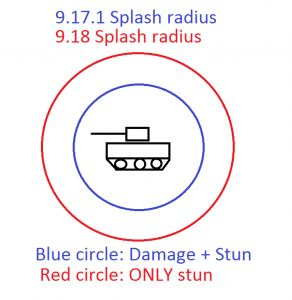 As for what the stun does? The stun effect diminishes the further the tank is away from the shell when it detonates, so that the further away the tank is, the lower the time that the tank will be stunned for. The stun effect also reduces the skill of the crewmembers of the tank as if they were wounded – meaning, if the tank’s crew were trained up to 100%, whilst they were stunned they would perform as if they were only trained to 50% or thereabouts. There are ways for tanks to defend themselves against this long stun effect – for example, fitting a spall liner will reduce the stun time by up to 50% for a super-heavy spall liner on super-heavy tanks. Tankers can also expend their medkit to recover all crew members instantly – downside of this is that the medkit will then be unavailable for 90 seconds until it recharges.

What’s the player opinion on these changes?

Funny you should ask that. Over on the official World of Tanks forums, one player posted a poll. Here are the results from the World of Tanks users that took the poll: 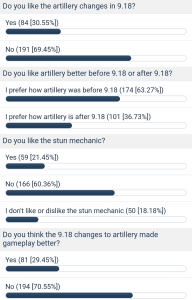 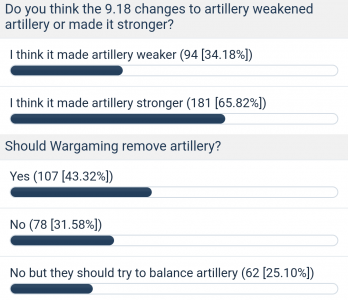 As we can see, just under 70% of all people who took the poll don’t like the artillery changes that were implemented in 9.18.  We can also see that 60% of people who took the poll didn’t like the stun mechanic that was implemented, meaning that we can imply that the stun mechanic is one of the reasons these new changes aren’t widely liked by players who took this poll. Amusingly, more people want to see artillery removed than want to see it be reworked and rebalanced. This poll shows the general resentment of this latest iteration of artillery, the latest attempt by Wargaming to balance artillery and make it a more “fun and engaging gameplay mechanic”.

We’ve had no official comments from Wargaming about the player feedback to the artillery changes that have come into play with the 9.18 patch. We probably won’t see another rework of artillery in the game for a while yet, as changes to this class are generally few and far between. Until then, I’m sure the community will continue debating and discussing the merits and drawbacks of this latest update to the artillery class. We’ll make sure to bring you any interesting developments surrounding artillery and the rest of World of Tanks. And as always, happy tanking.

Imperium.news writer, currently an EVE Online nomad. Currently addicted to World of Tanks, to the detriment of the rest of my life. Huge modern and ancient history nerd (the middle ages can get lost). A damned youth.