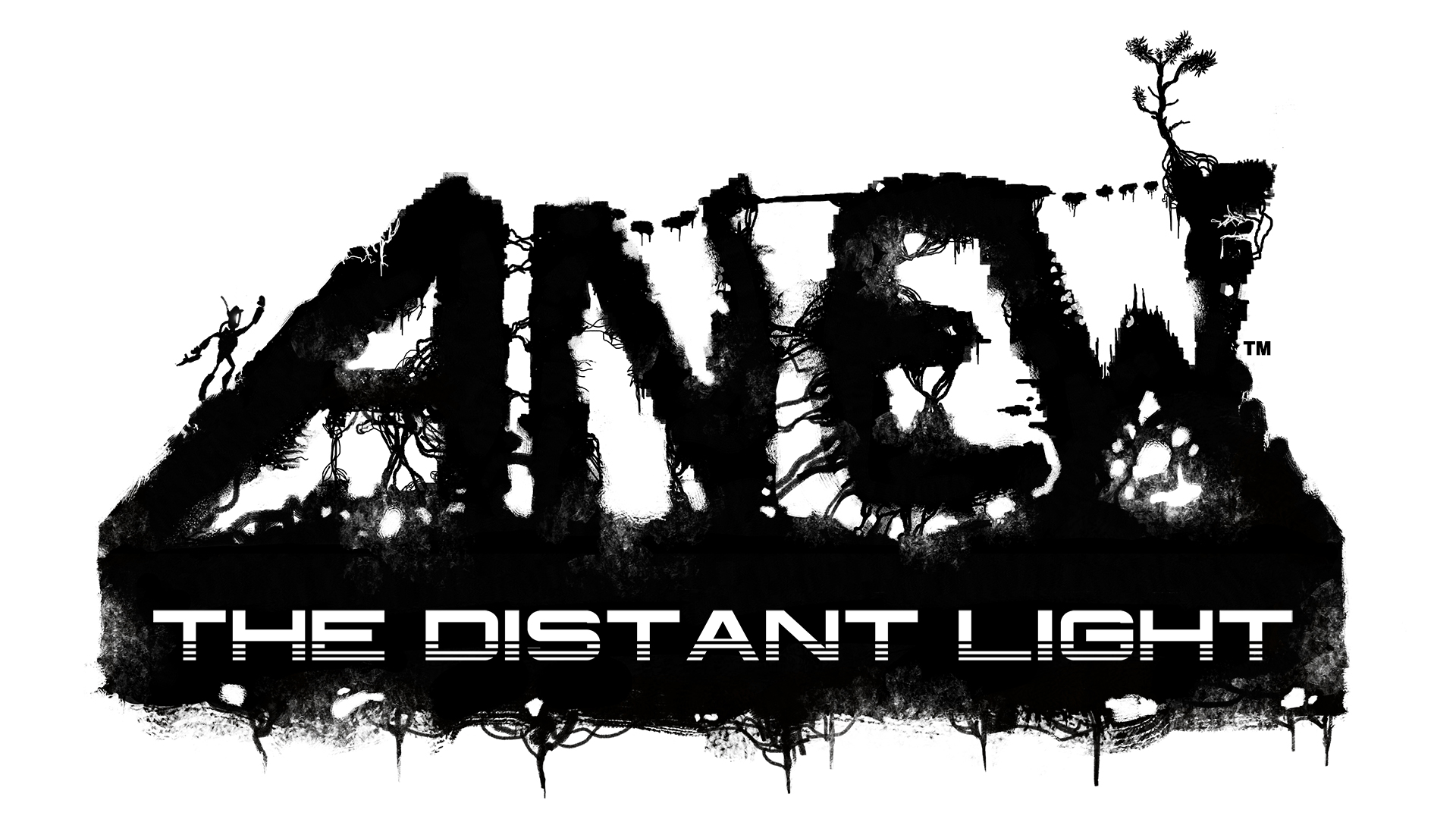 Last week, I wrote a preview of Resonator’s up and coming metroidvania, Anew: The Distant Light. Recently, Jeff Spoonhower and Steve Copeland, the game’s developers, were kind enough to sit down with me for an in depth conversation about the game.

Note: Due to a technical snafu, audio wasn’t recorded during the interview, so bear with me as I do my best to hit all of the high points of our conversation.

It’s clear from speaking with Jeff and Steve that they are both passionate about the idea. As fifteen-year veterans of the gaming industry, both bring a wealth of experience to the table. And, as the only two working on the title, they’re extremely focused on creating an intriguing world where every piece plays an integral part of the whole.

The idea for Anew started as a general concept – more of a game idea than anything else. Steve, with a solid base in mind, approached Jeff about the possibility of creating something in the Metroidvania genre. Together, they worked on multiple drafts of a story until the game’s current form was realized.

The general beats of the story sound almost familiar – a child wakes up on a moon twenty light years from Earth, and must complete mission of critical importance – but there’s obviously much more to it. Jeff and Steve were coy about what players could expect from the finished product, and there’s a reason for that. Every aspect of the game is so intertwined with the main story that being anything other than cryptic would ruin the experience that these two are so painstakingly crafting for the finished product.

The most striking thing about Anew is its visual identity. Jeff’s art style is unique. Organic. And every frame of the game looks like nothing I’ve really ever seen: 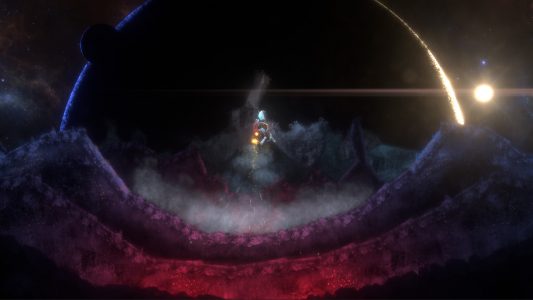 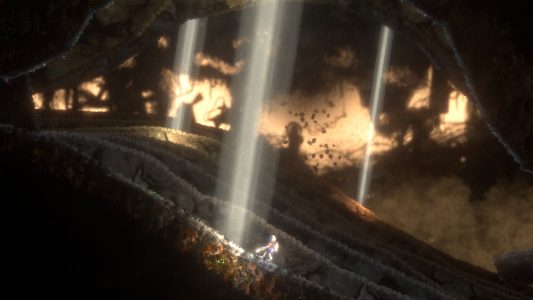 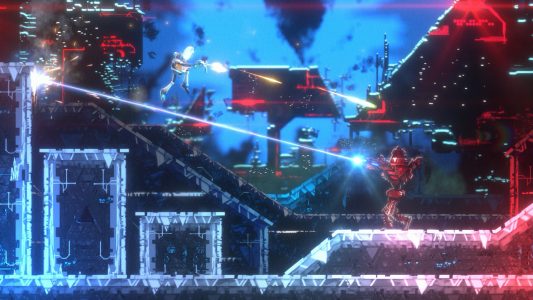 Jeff mentioned that his process consisted of drawing in his style for the game. Luckily, Steve was a fan. He did mention that the organic creatures and terrain presented some unique technical challenges. But, the results speak for themselves. In motion, the game is gorgeous, and I can’t wait to see more as development continues.

Jeff’s journey for someone to create Anew’s soundtrack was an interesting one. He described listening to many 20th century composers to get an idea of what type of music he wanted to accompany the game’s unique world. Then, he approached a handful of industry veterans. Armed with an intriguing idea, years of experience, and a liberal application of something nearing “we’re not amateurs”, Jeff got responses. And a composer that fit the bill perfectly – Wilbert Roget II.

A veteran of the gaming world, Wilbert Roget II has composed music for titles like Lara Croft and the Temple of Osiris, Dead Island 2, Star Wars: The Old Republic, and Monkey Island Special Edition. This is an impressive list, but it needs to be considering what Jeff and Steve want to accomplish with the game’s music.

Steve mentioned that, unlike typical metroidvania titles, the music in Anew is much more dynamic. Areas in the game are more fluid, so thematic music that is standard fare for most titles in the genre isn’t so much the flavor here. Instead, music is based off of what’s currently happening in the world. And, according to Steve, that can range from rousing offerings during battle, to simple atmospheric sounds during general exploration.

During our conversation, Steve made it clear that Anew takes inspiration from many places (one of the more intriguing mentions was combat from the Dark Souls series). The result is something wholly different. While the game is recognizable as belonging to the Metroidvania genre, it utilized all of its elements to create something new and interesting.

As an example, Steve mentioned Guacamele, and how the developers did something different with the genre, while managing to maintain firm roots. As a fan of that game, I found the comparison exciting.

But, I think one of the most interesting takeaways from our conversation was Steve’s description of the gameplay being based around “epiphany”. He painted a very clear picture: as the player advances through the game, there are places where interaction with the world might seem possible, but isn’t. Epiphany comes when a new tool, vehicle (more on that in a bit), or ability changes the way the player looks at the game world. For fans of the Metroidvania genre, this may sound overwhelmingly familiar. But, somehow, the way Steve talked about epiphany as a game mechanic made it sound like the way the player experiences discovery in Anew will be altogether different.

One specific example that Jeff and Steve provided had to do with a giant robot that the player will have an opportunity to pilot through a specific section of the game. The robot, while overwhelmingly powerful, presents a unique challenge to the player – while it can easily deal with enemies within its specified area, the player will have a much more difficult time. So, the decision to leave the vehicle to open doors was described as a tactical one. 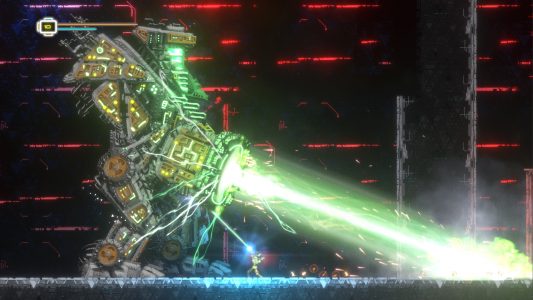 But the two also described this vehicle as an element of epiphany because there may be a way to take it beyond the bounds of its intended area. Maybe. And that triumph may make the players feel as if they’ve outsmarted the developers. Even though they haven’t.

Then, there’s the player’s base of operations: their ship.

The alien world surrounding the player is extremely hostile. So, the ship the main character arrived on is a refuge of sorts – one that the player will spend plenty of time returning to. 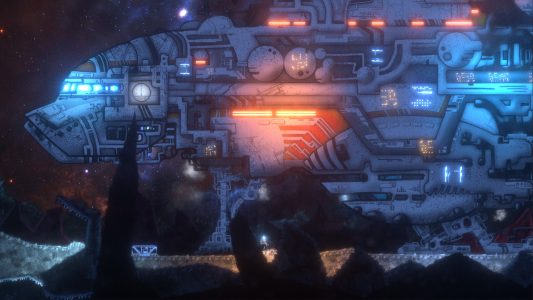 Steve described the ship as a safe zone within the game. And he mentioned that the time players will spend within the bounds of the ship will lend itself to more “contemplative” gameplay moments. 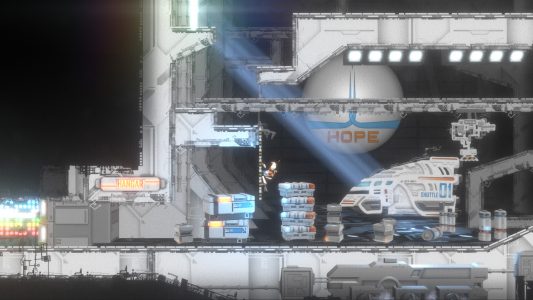 Most of the ship is shut down at the beginning of the game, so reactivating it becomes a goal with twofold results. On one hand, the ship is an area will the player will upgrade their weapons. Steve described a scenario where players will have to make a choice between useful upgrades. But the way the decision was described held real weight. And real consequences. On the other, there’s a mystery buried within the ship’s memory banks. Jeff cited 2001: A space Odyssey as inspiration for much of the ship’s mystery. The movie’s end sequence is one of Jeff’s personal favorites. And he was happy to be able to draw on it for the ship in Anew.

Near the end of our time together, the conversation turned to the Kickstarter campaign for Anew. According to Jeff and Steve, it was time. We spoke a lot about the nature of Kickstarter and the way that game development on the platform has changed over the years, but Jeff and Steve were both confident that there was enough of Anew complete that the campaign would be a success (as of writing, they’re currently at two-thirds of their goal with twenty days left to go).

If it is not, however, Steve acknowledged the possibility that development would need to pause while alternate sources of capital were obtained. This would, obviously, put the game off from its estimated release date of July 2018. That being said, both Jeff and Steve were positive about the game’s future. It is a labor of love for these two, and simply talking about the game’s future, it’s hard not to feel excited about the end product. Whenever it arrives.

The (not so) Distant Light

Jeff and Steve shared so much about Anew with me, that it’s hard to find a place for every little tidbit in just one article. Steve teased an arsenal of melee weapons, including a plasma (Maybe? He’s not sure…) cutter that could be used to dismantle enemies. Then, there’s the day and night cycle. And an accompanying environmental system. He also mentioned a closed beta for backers in the near future. And maybe others (Hi guys! Over here!). Jeff also briefly teased Steve about the game’s availability on the Nintendo Switch. As of the interview, there isn’t a plan to release on the Switch. According to Steve, the Nintendo development kit is still somewhat expensive, but it is a possibility. Maybe.

Most of all, I was impressed by the duo’s creativity and perseverance thus far. Anew has a lot going for it, and a lot left to reveal in the coming months. I’m already excited about the title and can’t wait to see the final product.

If you haven’t already, stop by their Kickstarter page and take a look. And keep an eye out of updates as they become available.