Alpha Clones and the Incursion Squad: A look behind the Curtain

The Incursion Squad is a social group within the Imperium that handles the highly lucrative Sansha Incursions in and around Imperium space. These incursions, for those who don’t know, are PvE instances that ‘invade’ a constellation of space for a short amount of time, can be farmed for both ISK and CONCORD Loyalty Points, and need to be run in fleets of varying sizes to ensure an optimal payout. Typically, these fleets are full of very expensive faction Battleship and T2 logistics hulls, due to the huge amounts of damage potential the rats have. Riddled with strife and infighting when I first joined, Incursion Squad was reborn a few months ago, and has since really has blossomed into something truly amazing.

This Squad, like most groups within New Eden, has its own doctrines they have created for their members. This doctrine also includes fits designed specifically around alpha clones, for new and old players alike. Touching on what I consider op-sec territory for a moment, I’m going to talk a little about the meta of current alpha clone ready incursion ships. It’s not difficult to figure out that most alphas now would be flying Cruisers – the fittings aside, Cruiser hulls are the only ship class Alpha Clones have had access to that can even hope to tank the massive damage application of the Sansha menace.

As it stands, the FCs of incursion fleets have to be careful of fleet composition. Much like most PvP fleets, ship ratios do matter in such a difficult level of PvE content. Throwing in Alphas so all Imperium members could reasonably be included within the fleets was a difficult task for something I remember being so exclusive. I’ll admit, as I write this, I have never been on an incursion fleet. Old player though I am, what I know of incursions was that of the old school pubbie. I remember showing up to incursions, begging to be allowed into groups being chosen by the strength of their hull and bling. Needless to say, I was never picked. It was never an inclusive profession, by any measure, when I was coming up. Even now, the High Sec groups that run them don’t allow Alphas – it really is an uncommon occurrence in New Eden. As a result, I’m quite frankly blown away by what this group does.

The Role of the Alpha Pilot

As of the writing of this article, Alphas within the Incursion Squad are allowed to use one of four hull types. Each of the racial ships have different bonus’ to them and have various support roles within the fleet. The Osprey, usable by Caldari pilots, is an alpha friendly ship meant to transfer capacitor at a net profit. The little Osprey also provides support to Guardian hulls under heavy neut pressure. The Bellicose, Minmatar by make, is great for enlarging the signature radius of the ships allowing easier and better hits for the mainline ships, and drones. The Augoror, the Amarr racial hull, is used much like the Osprey. It is there to support the capacitor needs of the fleet, often times cap chaining with Guardians to keep them online. Finally, we have the Celestis, which is the Gallente Alpha choice. It’s used to remote sensor boost the mainline and heavier hitters of the fleet, allowing them better locking times. The current role of the Alpha, as you can see, is that of support. The present alpha rules hinder some of the better cruisers, and while the changes won’t open up T2 hulls, it definitely will allow for the more effective pirate hulls.

The Squad itself is implementing a more progression-based line for its pilots to take in future. There will not be a static alpha ship once the new changes have come on December 5th, and Alphas will no longer be bound to cruisers. I’m sure someone else is writing a very detailed article on the upcoming patch so I won’t delve too deep into it, but soon enough we’ll see Alpha pilots new and old able to fly their battleships and enjoy it. More specifically, the Squad is currently developing skill plans for their Alpha Clone members that will guide them from their very first support cruiser through to flying the hugely versatile battleships like the Bhaalgorn shown below. Whether these Alpha pilots will end up subscribing, or just end up buying and using more bling, one thing is for sure. Change is coming, and the Squad is ready to roll with the times and provide everyone with the ability to make obscene amounts of cash. 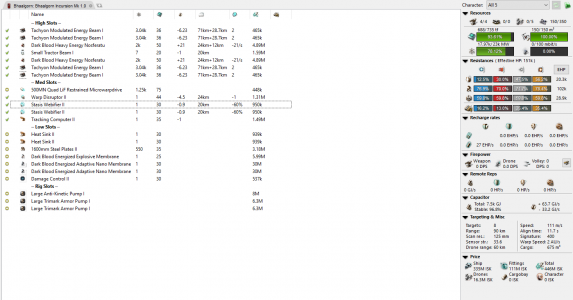 I was tasked a few months ago with writing about one of the FC’s breaking the LP records and just being an all-round boss by my CEO, Major Sniper of Ascendance. I’ll admit I dropped the ball and you all never saw that article. While this is not the article Major asked for, I will take the time out and talk a moment about Katrina BlueFlame. She absolutely demolished LP records and is certainly one of the most committed Incursion Squad members. Props to you for doing big things and making ASCEE look good. That said, the active members are making ISK, buying injectors, and having fun. Some of the more notable ‘no-lifers’ like Katrina, Dreamer and Bahbum are making huge amounts of ISK and LP, and your average goon Alpha is also making enough to feed their addictions.

Looking to the wider future of the Squad, new ship releases and strategy pave the way for fleets capable of deploying and handling incursions in far-off regions. With the changes to the clone state and daily alpha injectors, new Alpha pilots will no longer be shackled to cruisers like the Osprey for a lifetime. Returning players will have a chance to make ISK to plex their characters and play again for real, making the prospect of losing EVE look much more appealing as they slide back into their pirate battleships.

Too Long Didn’t Read: New Winds For The Incursion Squad

It’s no question Delve has been destroying the metrics on just everything, even rivaling trade hubs in production. One thing the metrics don’t show is this group truly crushing records and growing rapidly. During one of the previous Incursions, they even had two full fleets racing through sites to see which was faster. The Arms Race is coming, whether or not we are ready for it. Battleships alpha pilots will be the meta, and no longer will groups like the Incursion Squad be forced to choose between real DPS or being inclusive. They will no longer cringe at a +1 from an Alpha pilot, watching and calculating their ratios. So if any of you little bees are looking for a future profession, drop in and talk with the Incursion Squad, they’re very friendly.