It’s been a slow week at the ALOD desk. Usually the fools and credit card warriors that ply the space lanes of New Eden reliably offer up a glorious gem every few days, but of late they have, quite frankly, been slacking. Faced with this drought of catastrophic incompetence, we have had to take extraordinary measures. Instead of a single glorious diamond of failure, billions of Isk compressed into a single hull of gleaming perfection by the idiocy of its owner and polished by the guns of the predatory, we instead offer a rollup of those who managed to be merely very, very, bad. As the saying goes, quantity has a quality all its own.

First out the gate, we have a great example of somebody almost getting it right. There have been ALODs in the pastwhere haulers were used to transport massive numbers of expensive blueprint copies. What made these ALOD worthy was the fact that blueprint copies have almost no volume so the vulnerable hauler was completely unnecessary. An interceptor could have easily carried them all and, properly fit, such an interceptor is basically invulnerable due to how server ticks work. It seems that Kestral Anneto only got half the memo. The other half was delivered by the guns of a single Loki when he undocked. 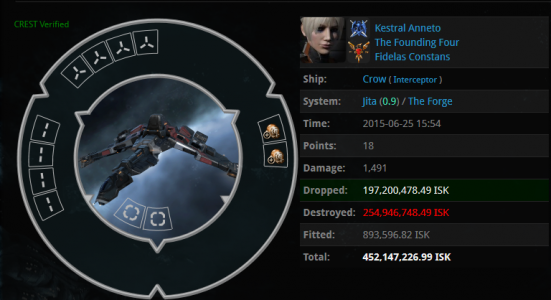 The fact that Kestral bothered to fit warp core stabilizers shows, if nothing else, that he at least grasped that mean space people wanted to kill him. However he failed to grasp basically anything else about how ganks work and therefore he exploded. Note that the actual loss is lower than the Isk total shown here as zkillboard typically overvalues blueprint copies.

Next up we have a pair of losses much more in line with the traditional ALOD. Oracle Haginen, a character nearly two years old, lost this Scorpion Navy Issue (SNI) in lowsec on June 21st to a solo Orthrus. 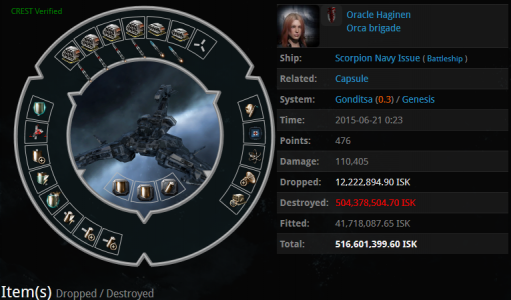 Judging by the contents of his hold, this was a mission running ship. And it really was quite the fit, for a lot of reasons. Everything looks like it was picked off rats; not a single T2 module graces this monument to inefficiency. Even the ammo is plain T1, not faction, and there are two cruiser-sized missile launchers that don’t benefit from the hull’s rate of fire bonus. This is especially egregious since Oracle could have gotten the boost by firing the same missiles out of rapid heavy missile launchers.

Then, depending on how the reader wants to judge such things, it was either dual- or triple-tanked. One rig and a couple modules are for passive shield tanking, but a shield booster and boost amplifier are fit as well. In the lows an armor rep makes an appearance without any hardeners to magnify its impact, making it little more than a waste of a slot and capacitor if it were to be activated. Certainly, the damage control, target painter, and ballistic control system are straws of sanity the veteran can grasp at, but overall the only thing keeping this fit out of prime ALOD territory is its bargain basement price.

After this loss, Oracle did change how he went about running his missions. Apparently, he relocated from the dangerous wilds of lowsec to the much safer highsec. Although this is pure speculation since none of the involved parties could be contacted at the time of writing, he seems to have decided to fit a Micro jump drive to his next ratting ship to facilitate escapes. He also transitioned from the extremely spendy SNI to a cheaper Rokh, which  promptly died to a single thoraxpiloted by Enyobutte. The Rokh fit was also something of a unique and beautiful snowflake. 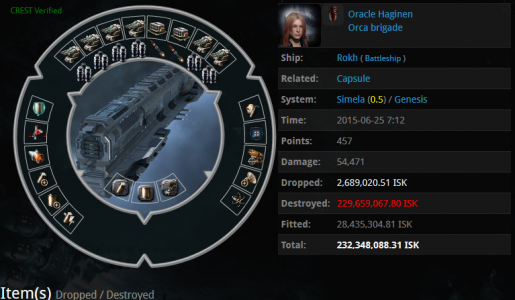 Yes, those are missile launchers on a Rokh. The rest of the fit has a lot in common with the SNI; multiple tank types, multiple gun types with T1 tungsten charges loaded, and a confusion of rigs that focus on nothing.

But the true, magnificent, reality of this killmail is to be seen not in the fit itself, but on what rests beside it on the killboard. After all, no war exists between Orca Brigade and Allibaitors, the corporation of the killer. So how did a single Thorax manage to stay alive long enough to pump out the 48000 damage needed to bring down this magnificent bird of fail? Because of this. The Thorax shot at Oracle’s mobile tractor unit and he, in turn, leapt to its defense in a ship singularly unsuited to fighting much of anything. Which just goes to prove that, along with his other exploits, bad is bad no matter where you are.

Next is a hauler who spectacularly failed a courier contract. For anyone thinking about shipping stuff via a third party, this is why collateral exists. However the focus here is not on the two billion in cargo, every scrap consigned to oblivion by the merciless loot fairy. No, the real gem is the fit on the Occator which was clearly designed to do… things. 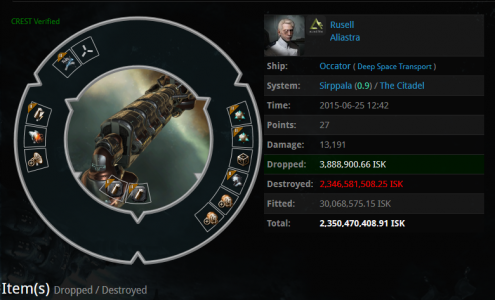 Some bits of this fit do make sense. The inertia stabilizers allow for faster travel, as does the nanofiber internal structure (though why it’s T1 is another question). The warp core stabilizers, coupled with the inherent warp strength bonus all Deep Space transports have, would enable this ship to ignore nearly any single tackler it was likely to run into. The cloak and MJD make sense too, as they enhance survivability in many situations. No, the problem here is this fit’s odd obsession with cap stability.

A pair of T2 cap rigs are more than a little out of place on a hauler, as is the cap recharger in the mids. Granted the hull gets a bonus to armor reps, which are cap intensive, but Rusell was in an NPC corporation at the time of the loss. Other than accepting duels or deliberately picking a fight somehow, there is literally no situation in highsec where having more cap could possibly be useful. Then there is the ECCM. Why in the name of Bob almighty would a hauler need to avoid getting jammed? It can’t be to make it harder to scan down; the cloak does that perfectly by itself. This looks like nothing so much as an Occator intended for some kind of combat. But not the kind with three Tornados.

Finally this roundup closes out with a true hero of the ALOD world. Kadet Albanskiy is one of the unsung workhorses of bad fitting, always keeping his fits just cheap enough to stay under the ALOD radar. However an investigation into his killboard, which is an unbroken wall of red dating back to December 6th 2013, takes the reader on a journey into a years long history of horrific fits, each more beautiful than the last. Below is only a sampling of his work, highlights culled from a career composed of pure and indescribable amazing.

An officer fit Raptor with no point. 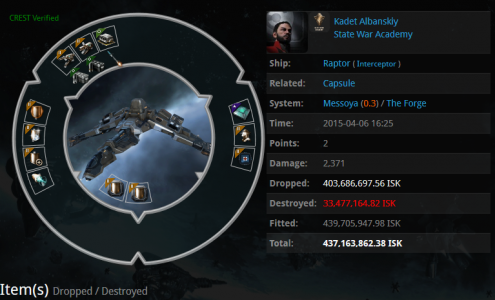 An overdrive and injector fit Scorpion with no prop mod. 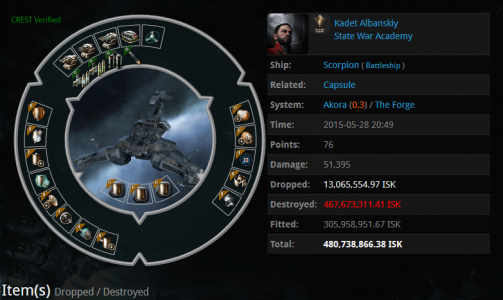 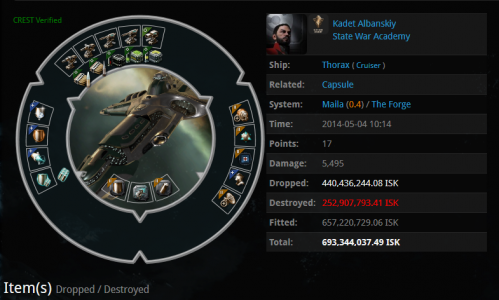 And then another Thorax with fewer guns types, but a higher price.

A three-gun-type, deadspace-tanked Ferox with cap rigs and an Ancillary Shield Booster. For bonus points, the pod with mining implants! 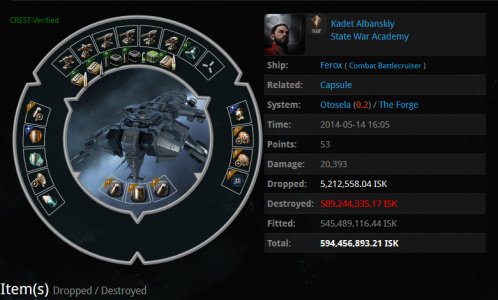 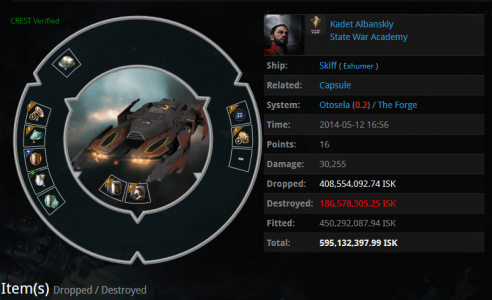 If nothing else, one has to admire Kadet’s persistence. When his ships died, he just fit up more, sparing no expense of course, and set out again to seek his fortune in space. Still, as the poster goes at despair.com, quitters never win, and winners never quit, but those who never win and never quit are idiots.