The Scale and Power of EVE Online’s Ships

When you hear about EVE Online’s ships, especially their power and size, you typically hear them discussed in terms of Damage Per Second (DPS), Effective Hit Points (EHP), or their mass and their length. While these make it easier to comprehend within the bounds of the EVE universe, it is still hard to visualise the size and power of these ships. There is no in-game representation of the power and size of EVE Online’s ships and stations, but using the data given in-game, we can compare and represent the scale of EVE Online’s technology.

To start out relatively small, we can look at DPS and EHP in terms of energy. Now EHP and DPS are the standard units we use to determine what a ship is capable of in game. These are the most important units when it comes to fitting, but there is no standard conversion for what DPS or EHP means in terms of actual energy and what it looks like in real life. In order to find out what one DPS or EHP means in terms of energy, we need to look at the energy value for weapons and convert them.

Lasers are the perfect example because there is no ammo which can hold extra energy, only the focusing crystals, which take the energy and focus it in a beam – think of it like a magnifying glass on ants. The crystals don’t hold or add energy into the system, and if they do, it’s a finite amount, which makes laser or energy weapons the best conversion point.

For this example, we use the Dual Giga Pulse Laser II, which has a base value (without skills or bonuses) energy usage of 320 GigaJoules per shot and does a volley of 16393 damage. If we subtract the damage bonus from the ship itself (180%) then you have a volley damage of 4554 damage. If we divide volley damage by energy usage you get 14.23 damage per GJ. Without resistances, one GJ is equal to 14.23 EHP of damage. In other words, one shot from one Tech 2 capital laser weapon is close to the energy output of 76.5 tons of TNT. That is a little more than ¾ the energy of this explosion from one shot. An easier conversion to understand, is that one EHP or damage is worth about one hand grenade in energy.

So, what about the most powerful ship weapon in the game? Targeted Doomsday devices do 1.5 million damage, so converted to Gj and then converted into TNT, you get a little over 25 kilotons of TNT. To compare, the Hiroshima A-Bomb was around 15 kilotons, and the Nagasaki bomb was around 21 kilotons. So, if you are getting hit by a doomsday from a titan, you will either die, or you will have survived more impact than a World War Two nuclear bomb. 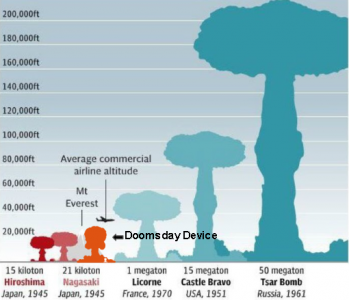 Now that the true power of New Eden’s weapons are realized, we can understand how much of a beating these ships can handle. Recent titan deaths show 4-9 million damage taken before it explodes, which is the equivalent of multiple nuclear explosions taken and survived. Even some dreadnoughts in WH space have tanked multiple millions of EHP. The technology of EVE Online’s ships allow them to take tons of damage and keep working like they are supposed to work.

When it comes to size and scale, EVE Online’s ships and stations are truly massive. Not only can they be extremely long, up to several kilometers in length, but they are also correspondingly tall. There are no particualar size limitations in space, unlike our real-life vehicles which have to float or fly. As a result, they can be a infinite weight and size, and the only limitations are the amount of materials required and the intention of the designer of the ship or station. The largest ships currently in existence in the New Eden are the titans, which can be up to 18 kilometers long and several kilometers tall, massing up to 2.4 billion kilograms. To help you comprehend, it would take almost 4 hours to walk the length of a Ragnarok titan, and each titan weighs about half as much as one of the Great Pyramids of Giza, which are the third heaviest objects ever created by mankind. Those measurements are without fittings, too; these massive warships have weapons the size of buildings, and most fits for armor titans have multiple layers of 25000mm plates. If you jumped off the edge of the armor plates on a typical Avatar and fell to the hull structure, you would fall 25 to 75 meters, and you would almost certainly die on impact.

While these numbers are insane, and the technology required to generate them is immense, they are not the most impressive feats pulled off in New Edens history. Stations are much larger, with the largest being the Keepstar Citadel, which is hundreds of kilometers long and tall, and can hold millions of residents along with thousands of ships. These are stations the size of entire countries, and if one appeared on top of the state of New York, it would look something like this:

While the keepstar would be the heaviest and largest object ever created en-masse by humanity, there are some even more impressive ships that have been conceptualised and created, and then consequently destroyed (or never built) in New Eden’s past. The Iapetan Titans were the largest ships, and maybe even the largest things, ever created by humanity in New Eden. According to this reddit post, using the pixels in pictures and comparisons of the old ships, they were up to 516km in length and 157km in height.

These ships carried crews that would be equivalent to the population of a planet, and they would need an entire planet to be destroyed to provide enough material to build them. These ships had enough power to utterly devastate whatever they wish, from ships to entire solar systems according to some of the only information we have. These ships were either destroyed, deconstructed out of fear of mutually assured destruction from the other empires, or in the case of one Gallente Iapetan, stolen by the Serpentis. Rumour has it the Serpentis have held and maintained it to this day, hidden somewhere in space.

So, EVE Online’s ships and stations are extremely massive and powerful, and have a much larger effect then it seems when you are controlling these massive ships in huge fleets and historic battles. The game does a good job at making you feel small and insignificant compared to other games, but in truth you are wielding the power of entire militaries when you fly around in these ships. Next time you’re in space, take a moment to remember what you have at your fingertips, because it will surely change your outlook on the game.

I have been playing EVE for about 4 years. I like 1billion isk ticks and PVP. I report on wormhole stuff.