I wrote in my very first piece on INN that “there’s more to some games than just the game itself.” Eve is definitely one of those games, but it’s not the only one. Another game that lives up to its reputation for being “more than just the game itself” is one which, I’ve learned, shares some lessons with those taught by experience in Eve: The grand-daddy of the poker world, No-Limit Texas Hold’em.

Back before the war, while much of the rest of New Eden was out generating a massive number of lossmails during the opening weekend of “Into the Abyss,” my meagerly-skilled capsuleer was having his own adventures closer to home. Sadly, those adventures, while in less exotic areas of space, were no less expensive.

It all started here on INN. I had some disposable income from a recent article, and decided to spend part of it on a Gila. 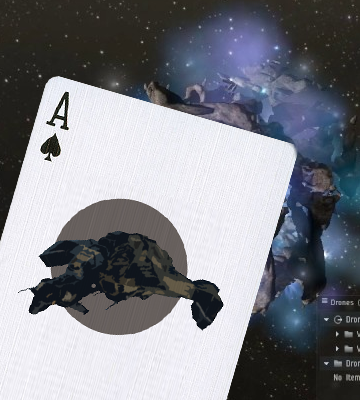 I have to say, it’s by far my favorite ship so far out of everything I’ve piloted in my very short time in Eve. I fitted it out with a respectable shield-tank and took it out for a spin.

My first expensive lesson was the fact that pirate faction ships apparently don’t insure at anything close to market value, due to the inexpensive cost of materials required to manufacture them compared to the cost of getting one’s hands on a BPC (now if only a BPO for the thing existed, I’d be set for life!)

So began the first lesson from the world of poker: Don’t sit down at the table if you can’t afford the buy-in, which is just another way of re-stating Rule Number One of life as a capsuleer: “Never undock anything you can’t afford to lose.”

I spent the next few days ratting around Delve. The belt rats and pirate dens cleared a whole lot faster in my new ship than they had in the Vexor and Myrmidon I’d used previously. I was hooked.

I learned my next poker lesson jumping into a Forlorn Hub a few days later: When you’re in over your head, fold the hand and walk away.

I’m not very good at walking away. 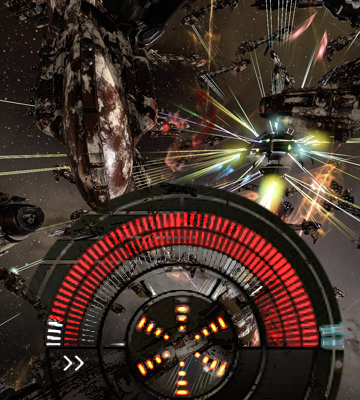 I dropped my MTU, launched my drones, started orbiting, and cleared the first two waves perfectly. I was nearly through the third when I made my first mistake: With three battleships and a cruiser left to clear, I was a bit too slow redirecting my drones, and accidentally gave them enough time to eliminate the cruiser I knew would trigger the next wave of reinforcements.

Suddenly I was facing six battleships and an assortment of other foes. I managed to hang onto my tank long enough to take out the smaller stuff, and warped off for repairs.

I should have quit there. I didn’t.

I figured: It’s only Battleships left. I can stay mobile enough to keep under Battleship guns.

I warped back into the mess of Battleships, and into my next Poker lesson: Know your opponent’s range.

In poker, this means understanding the range of cards your opponent may be holding, based on his or her actions in the hand. In my case, though, it was a good bit more literal. I was counting on being able to stay under the Battleship guns, but I was doing so while operating at the outer edges of my Gila’s drone control range (while still well short of a Blood Pope’s falloff range). The long distance decreased my angular velocity and made it easy for the enemy turrets to track me, where they would have been unable to do so if I’d been orbiting much closer at the same speed. 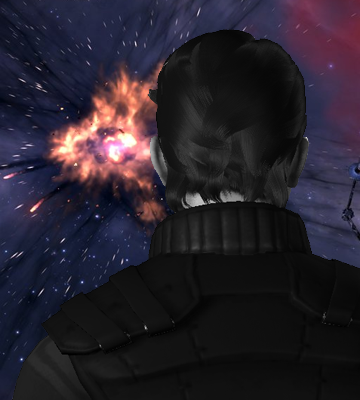 So my tank started to buckle again, and in the process I made my next mistake, breaking another cardinal poker rule in the process: Play the man, not the cards.

In poker, this means adjusting your play to account for different opponents’ capabilities and idiosyncrasies, independently of the cards you’re holding yourself. I failed to do so, and it cost me.

My typical method of clearing out a wave of rats is to start with the smallest (and fastest) rats on grid and chew them up as quickly as possible to minimize the number of guns pointed in my general direction. The only exceptions I typically make are to primary anything using webs, neuts, or scrams, or when I know taking out a certain cruiser or battlecruiser before finishing off the battleships on-grid will trigger the next wave of rats.

In this particular case, though, I was facing about three different varieties of Blood Raider battleships, and I’d lost track of which type was the trigger. So I reverted to my typical play-style of dealing with the smallest and easiest to dispatch threat first.

In doing so, I killed the trigger.

Suddenly I was on-grid with nine Blood Popes – and at this point had still not corrected – or even realized – my earlier mistake of orbiting at too great a distance.

My tank melted pretty quickly then, at which point I faced my next Poker lesson: Know your outs.

In poker, this means pretty much the same thing it means in Eve: If you’re facing a losing hand, be aware of all possible avenues to escape the hand, and the steps you need to take to make that happen.

I panicked, and as soon as they got through my shield-tank and started to hit armor I found the first object I could pull up on my Overview, abandoned my drones, and started spamming Warp-out.

But I didn’t know my outs. I haven’t been a capsuleer for long, remember, and one of the things I didn’t yet realize at the time was how . . . much . . . slower . . . one’s time to warp is with propulsion modules running. In my hurry to get out, I failed to turn off my afterburner. So instead of warping out quickly, I sat there cursing my ship for its glacial pace in getting underway, as my thin belt of armor, and then my hull, got thinner and thinner and thinner.

One might think the lesson ended there. But I wasn’t done yet. No, at this point, I was on tilt.

And as any competent poker player will tell you: Never play on tilt.

In poker, that means you walk away from the table when you’re in an overly-emotional state. Lack of rationality in assessing the board and your opponents will hurt your effectiveness, lower your risk aversion, and cause you to lose, and lose big.

As it turns out, this is true in Eve as well.

So I hopped a couple systems back to 1DQ; quickly bought, fitted, and insured another Gila; and proceeded to violate the next cardinal rule of poker: Don’t throw good money after bad. According to my (remember, not entirely rational) thought process in the moment, I still had an MTU and a massive, floating ball of wrecks that I needed to recover (including whatever I could save from my lost ship). All I had to do was chew my way through nine Blood Popes to do it. No problem, right?

That may be true for more experienced pilots. In fact, it probably wouldn’t be too stiff a challenge for me even now, with a few months of ratting experience under my belt. But in my aggravated mental state (having just flushed more than a quarter-billion ISK), with my limited abilities (both space skills and actual player skills), that was simply not going to happen.

But of course, I didn’t know that yet. So I hopped back into system, failed to correct any of my earlier missteps, and within minutes had a second Gila wreck floating next to my MTU, right beside the first one.

Still on tilt, I jumped back to 1DQ and grabbed my salvage Cormorant with the thought that I could at least jump in, scoop up the MTU (perhaps saving some of my more expensive mods that had been hoovered up by this point), and jump back out.

Of course, I wasn’t thinking through the fact that this required parking the normally zippy destroyer near my MTU long enough to loot it and scoop it.

The blob of Blood Popes one-shotted my Cormorant and sent me home in my pod for the third time in ten minutes.

At which point, I gave up and went to bed, down more than a half-billion ISK in lost ships and equipment. 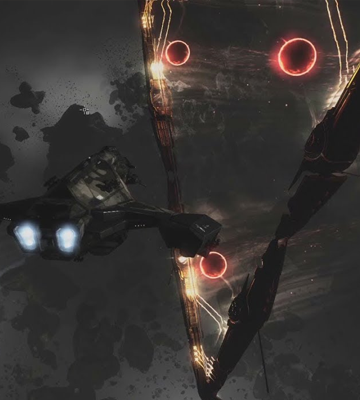 But there was one final Poker lesson for me in the evening’s experience: When you suffer a bad beat, pick yourself up, shake it off, and move on. A “bad beat” in poker is when you bet big on a hand that looks like a sure winner on paper, only to lose it all in the actual game – for example, if you’re holding fantastic cards, but your opponent just happens to lay down ever-so-slightly better ones when all the chips are in the pot. I’m sure every capsuleer in New Eden has probably had that fight – either in PvE, PvP, or both – where it seemed obvious that they should come out on top . . . right up until they didn’t.

I talked through the experience with a couple of Eve mentors, spent some time analyzing my mistakes, and have tried to apply what I’ve learned – without risking quite so much ISK – flying around Delve in a Vexor Navy Issue (which I’ve discovered I enjoy almost as much as my dearly-departed Gila). Constructing this article – a laundry list of “how not to fly a Gila in a Forlorn Den” – was another part of the learning process. It’s by far the most expensive evening I’ve spent in New Eden up to this point, though I’m sure as I grow into bigger and better hulls that will change.

My hope, though, is that one thing won’t: I hope that I’ll always find ways to use these experiences as opportunities to learn and grow, not just as a capsuleer, but in my ability to deal with analogous situations in the real world we all inhabit when we’re not flying Internet spaceships.

Because those sorts of learning opportunities are one more way in which Eve is far more than just the game itself.