In Memoriam – The Molea Cemetery

The Molea Cemetery has been in constant operation for the past 9 years (a previous iteration was attacked by JihadSwarm), housing the bodies of dead capsuleers. The Cemetery was initially started by Azia Burgi as a role playing exercise. She thought it rather sad that capsuleer corpses were just left in space forever. However, it has since grown, and now capsuleers leave dedications to fallen friends, both in and out of game.

To find out more, INN caught up with Linara Faerin, the current caretaker of the cemetery:

INN: How & why did you get involved with the Molea cemetery?

LF: I got involved about 6 years ago when Azia had asked for anyone that wanted to help her run it. I decided I would, seeing as how I knew her for a time prior to this and didn’t mind the work. So I came on as more a caretaker role than anything, and just did general upkeep on the cemetery so that it wouldn’t fade away. Azia wanted to keep the role of burying the corpses herself, and I just did whatever I could to keep ISK flowing in, and the forcefield up. Figured it would be an interesting new aspect of EVE that I hadn’t tried yet, and the niche appeal of it intrigued me.

INN: What is the purpose of the Molea cemetery?

LF: The purpose of it was for people to bring their corpses here to be buried, because Azia had a vision of all these poor corpses that were a result of combat and that were being shown no respect, to have a place where they could be buried with honor, respect, and dignity.
It’s a service to all in EVE, no matter their affiliation because in death, all of us are equal. 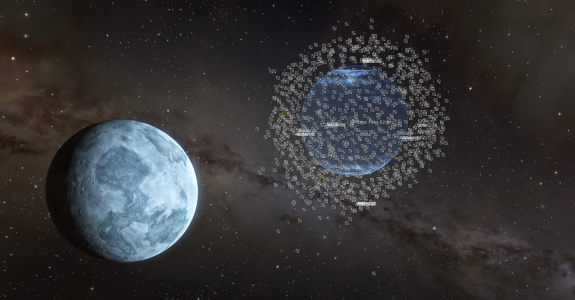 INN: Why do you have a forcefield up – was there a particular event that led to it?

LF: The forcefield is needed because in the past we’ve had people to try to attack the cemetery, so we have defences in place so that grave robbers cannot come in to steal the corpses that are there. We had an incident with Goonswarm many years ago that took out the POS, so we increased our defences to provide a measure of protection, which is why we keep the forcefield up, so that we won’t lose the POS and thus the cemetery. No particular event, just a general precaution.

INN: Do you have any links with B4R?

LF: No direct links to B4R, although my character (Linara Faerin) is in there as an occasional mentor/shoulder.

INN: Why do you think EVE has this, when other MMOs don’t?

LF: I think the reason why EVE has the cemetery is merely because it is an open-world type of game, and while CCP provide the basic tools, it’s up to us to use them in interesting and creative ways to provide content. Not all content in EVE is PVP, the Molea Cemetery is proof enough that people have and will continue to play this game in very interesting ways that are outside the scope of CCP’s initial ideas.

INN: Do you have plans to maintain Molea permanently?

LF: I plan to maintain the cemetery as long as possible, however with the removal of POS’s coming up soon, I am not sure if we’ll be able to continue in this manner.

INN: There have been calls for CCP to make a formal monument at Molea – do you agree with that?

LF: I have yet to speak to someone at CCP regarding this, if we’ll be able to get a monument made that can still have the same attributes for the cemetery (no removal of containers past the 30 days expiration limit). I would very much love to see something like this happen, and there is precedent for it with CCP so I would hope that if I can get in touch with them that something like this might be possible to accomplish. Lots of hard work have gone into the cemetery and I would hate to see it just fade away with the phasing out of POS’s.

The Molea Cemetery is one of EVE’s long-standing player-made landmarks. Stop by to pay your respects or just to see what the community has made, in the Molea System,  at Planet I – Moon 2

Today, we are announcing Anger Games 5! This year, the...