On Monday, in Sarum Prime, many capsuleers gathered together to hold a memorial service to show their respect for their late Empress Jamyl I who was so publically and brutally assasinated on Friday by a drifter force. A senior clergywoman named Alizabeth Amalath from the Order of Jamyl held the ceremony for the faithful at 18:00. What followed was a very emotionally moving, dignified and respectful outporing of grief and love over the tragic passing of a young woman who was loved by so many Amarrians. The followers then travelled to Safizon, the system where the Empress was murdered, where several of them, including Alizabeth Amalath comitted ritual suicide of their ships and pods, but not before giving their crew members the chance to to disembark if they so wished.  She very kindly gave TMC a full transcript of the ceremony which those faithful who could not attend may read at their lesiure well as an exclusive interview we will begin with. 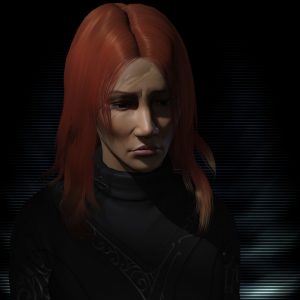 TMC: Many capsuleers heard about the memorial today to the Late Empress Jamyl Sarum I, it was sent out all across New Eden. I understand many many faithful followers attended the event.

TMC: It seemed to be a fitting, yet solemn occassion after a terrible event. May I ask what prompted you?

Alizabeth: “Well, there was always going to be a funeral.  There will be a full state funeral for her on Amarr Prime soon, I believe, but in this case, given that so many of us were with he at her death, it was very important for our own faith, our own grief to have a funeral for capsuleers.  The clergy are the sheppherds in the darkness and her majesty’s passing made things very dark indeed.  As one of the more senior clergywomen among the faithful capsuleers, I took the lead to ensure that we had a service and I hope that it has helped the faithful in these troubled times.”

TMC: It looked very much as if many, many people were moved by the words I heard you speak. I confess I am Minmatar, hoever I nevertheless found I was touched by sincerity.

TMC: Whilst I can, naturally feel empathy to anyone who loses someone they revere as a leader and inspiration to a nation

Alizabeth: “Thank you.  This was probably the most difficult mass I have ever put together and I am glad that people came and found meaning.  I am also going to say that your race doesn’t matter.  All  those that step into the light will be saved by His grace.  That was one point that her Majesty always made.”

TMC: Could you please explain to those who perhaps do not share your faith, love & trust in someone they may have doubts about? Her claim on the throne? IS SHE alive somewhere?

Alizabeth: “I had hoped and prayed that what I saw was wrong and that her Majesty was still alive somehow, but in my prayers and meditation, I am now confident that her death was all part of God’s plan.  So, I don’t expect I will see her again in my lifetime.”

TMC: Your mass was from the heart.

Alizabeth: “That is the only way I know how to preach.”

TMC: You went to Safizon, with other capsuleers

TMC: And immolated yourselves and your ships in her memory. May I ask why?

TMC: Again, it was very moving, but why?

Alizabeth: “Ritualistic suicide has a long history in the Amarr Empire.  It’s not something that is widely practiced, but is rooted in the faith, see the Shathol’Syn.  For my part, I was the commander of the logistics wing of one of the loyalist fleets.  There is a feeling of failure, of loss, of grief, that she was our leader and we should have died protecting her.  I am sure that others feel the same.  I know not all of my crew chose to abandon ship and I know other members of Kerri Kane’s paladin did not abandon either.  But, we capsuleers do not have the luxury of dying a perminent death and have to carry on and continue on the path her Majesty has set for us.”
TMC: We could all see that you gave your crews the chance to leave your ships.

TMC: Do mind me asking how you see your future now that your Empress is no longer here?

Alizabeth: “For the time being, I am going to be setting up a new religious order, The Order of Jamyl.  Hopefully, soon we will change that to the order of Saint Jamyl.  We already have one chapel in construction in Amarr and will more, I hope.  We’ll keep her memory, her inspiration and what she stood for.  We will also look for her return, but I don’t expect that for a long, long time.
As far as the Empire goes, we will have succession trials and a new Emperor will be inaugurated.  And they will be our leader.  Her Majesty’s death, while tragic is not the death knell of the Empire.  We are still strong.”

TMC: Will your organization be part of the succession trials?

TMC: I assume you support House Sarum, but are there any other candidates you favour?

Alizabeth: “That remains to be seen; I think that it’s too soon to be making that decision on my or my order’s participation.  I am actually Kadorian.  My brother is a Holder on Kador Prime III, so I would expect that he wants me to fight for Lord Kador.  To be honest, these are not decisions I am really thinking about.  We still have not buried her Majesty, so ask me again after that.”

TMC: I respect your need to grieve for your lost leader. I hope we may speak again at a later time as the succession trials loom closer.

TMC: Many thanks for allowing me to speak to you at this difficult time.