Maseer, Aridia region. On April 28, at 18:31 EVE time, an Erebus belonging to Lusin Gando was destroyed. The titan exploded due to extremely heavy gunfire from four titans and multiple dreadnoughts from LowSechnaya Sholupen, Heralds of Darkness, and AXIOS. 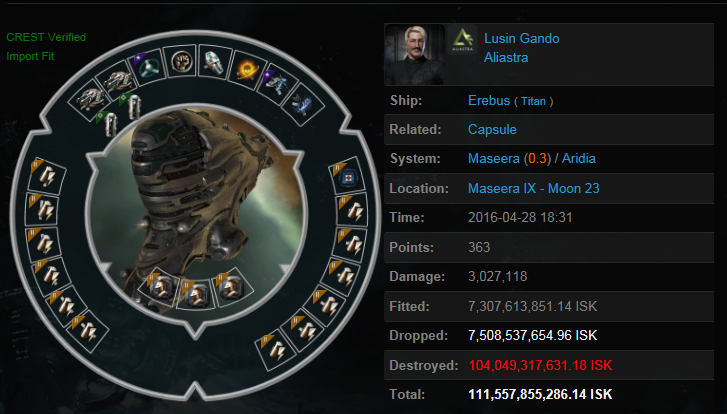 “One does not simply travel through Aridia.”

The pilot was previous a member of FinFleet within Northern Coalition. As many new or unsubbed titan pilots come back to join the war effort, they tend to run in situations just as this. It is unclear as to what happened exactly; however, his fit allows us to assume that Lusin was moving his Erebus to join the war and got caught in the process.

The Erebus was noted as still having installed Large Trimark Armor Pump II rigs, meaning this titan is was quite old.

Ninety minutes after the FinFleet Erebus went down, another titan exploded; this time in the Malpais system of RUF3-O. The Ragnarok, belonging to CMDR X of Badfellas Inc., died with three Archons, two dreadnoughts and two FAXs on a friendly pos. 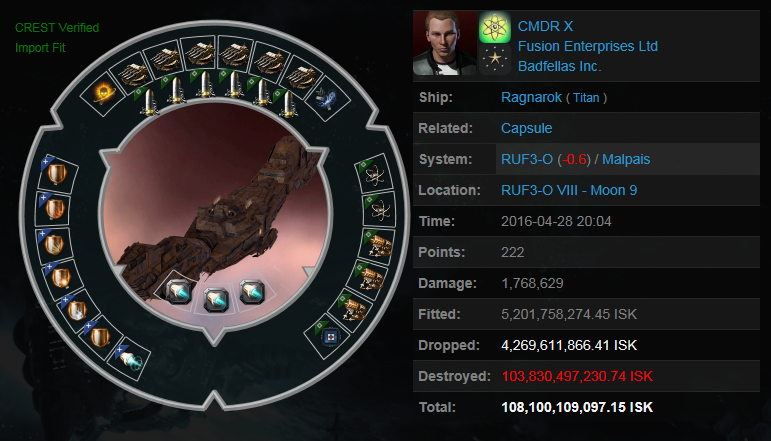 Unconfirmed reports stated that the capital fleet and Ragnarok were hitting a POS in system when V0LTA, -SMF- and KICK jumped in with two Nyxes, a BLOPs gang and Cerberus fleet. When the titan and capitals warped off to safe up, they did so by warping to a small POS, causing them to bounce out of the POS to their deaths.

It was found that both pilots were carrying illegal booster drugs in their cargo hold. Whether or not the pilots were under the influence will be investigated by CONCORD. Fines and reduction in standings may result if the frozen corpses of the titan pilots test positive.