BFG Changes: The Flyswatter without a racket

So at EvE Vegas 2019, CCP made several announcements regarding ship balancing, some of which were just around the corner and some far into the future. The response CCP got from the players regarding all the changes has been mixed, to say the least, with some of them not changing anything like the combat interceptor changes to some that “make a ship useless”, and this last point is what brings me to the Bosonic Field Generator and CCP’s vision.

When the flyswatter was a new invention

Back in 2015 CCP set out four guidelines for their newly developed super weapons, or Doomsdays, for the Titan class capital ships alongside the gigantic capital re-balance that included changes to Dreadnoughts, Carriers, Super Carriers and the release of Force Auxiliaries in the late 2016 expansion EvE Online: Citadel. Those four guidelines were as follows

These are all respectable guidelines that were initially followed when these were released as Titans were quite rare outside of the largest alliances, and even in those alliances Titans were risky to use and were rarely used because of this, especially not outside of large alliance fleets. This leads us to today’s problem and why CCP decided to give the BFG such a large nerf.

Swatting Flies – The Boson in Action

In today’s environment the game is much safer than it used to be with citadels and super umbrellas, so using the BFG on gates to try and kill small gangs or even solo roamers in your space has become a popular deterrent against roamers. This more or less succeeds, depending on the intelligence and preparation of the roamer. But the effectiveness of this method has often been criticized by the people it’s used against, with good reason. When CCP first released this module they implemented a signature lock on it, so anything below 2,000 signature took reduced damage from the module, but this signature lock didn’t do as much as it was supposed to. 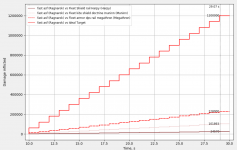 This is a best case scenario for the roamer, or in this case fleet, where the ships are fitted with the maximum amount of tank (assuming a mostly t2 fitting), yet all of them will die to the BFG without even having their micro warp drive on and without the micro warp drive on you’ll struggle to move out of the Bosonic field in time. The Assault Damage Control might save the Harpy and the Muninn pictured above in an ideal scenario, but it is still risky as you’ll have to survive five seconds without the ADC, even if you time it perfectly. And here’s the real issue. If a ship fitted to survive as much damage as possible can’t survive it outside of an ideal scenario, how is a ship designed around speed, utility and damage supposed to survive it when they have half or less of the buffer tank their equivalent max tank fit has? They’re not, and that’s where the complaint comes from, which led to the current nerfs.

The flyswatter’s inability to swat flies

Now, when CCP Rise went on stage in Vegas people were already prepared to write angry posts because he had announced nerfs to Bosons during the keynote the day before, which didn’t please the majority of the player base that live in null and use Titans or are looking to get into one later. As the change was announced the cry of thousands of nullsec inhabitants was heard in the distance.

Where 90% of subcaps would die to a BFG before the nerf, almost nothing without the MWD active will die to it, even a buffer tanked t1 frigate is going to survive the full duration, And this nerf goes for both NPCs and players, making ratting in Titans significantly weaker to the point of irrelevancy. This nerf effectively removes the entire point of the module, as you can turn off the MWD in the 10 seconds charge-up the BFG has and survive that way, not by piloting smartly or outplaying the Titan, merely by taking all that damage and shrugging it off. While this greatly benefits small gangs and solo roamers as it removes something that’s been a bother for a long time, it is going to remove the module from use and make a ton of people incredibly unhappy about the state of this already broken game. If this is what CCP wanted, then they might as well remove the module. But since they didn’t remove it, we have to assume they want to keep it in the game, and if that is the case, CCP severely needs to take a new look at the module’s signature radius.

A well aimed BFG should definitely have a huge effect on the enemy fleet, but if the enemy fleet plays it well they should not be killed by it alone. But should they be affected severely, there should be ways to express skills on both sides, both piloting-wise from the target and aim-wise for the Titan. Active-tanked ships should be forced to run reps to survive/recover from it and buffer-tanked ships should lose much of their buffer if they stay in the boson field for the full duration, yet both types of fittings should be punished harshly for using their MWDs, as this should be able to kill them over the duration. A nerf to this module is definitely needed to add some well deserved counter play, but this nerf is too harsh and is going to put the module out of use completely.