ALOD: BUT WHAT WAS IT FOR?

Special thanks to Tyrant Scorn of Strategic Tactics And Recon for bringing this killmail to our attention; without their diligence in informing TMC of their accomplishment this fit might never have gotten the recognition it deserved. At the time of writing Morganja, the victim, has not responded to multiple attempts at contact.

The ALOD desk is, by its very nature, not the place a writer expects to see high levels of competence at Eve Online, the Internet Spaceships Game. On the other hand one can usually tease out the idea behind most of the fittings that bumble their way into the annals of failure which we so lovingly chronicle. And then we get a fitting like this one, with its most wondrous pod as a bonus. Granted we know what it did. It exploded. But what was it supposed to do? Trying to figure it out has driven the author to drink, though this is admittedly a very short drive, and now you, humble reader, are invited to come along on a similar journey of un-enlightenment and amusement. 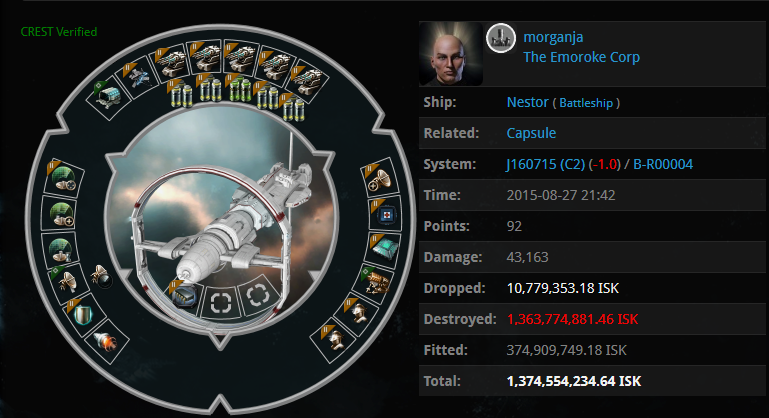 Taken in isolation the fit is terrible, particularly considering the pilot has been active for many years; it came within a single box of winning ALOD Bingo. First off is the choice of guns, apparently ungrouped since one had Spike loaded while the rest had Javelin. The Nestor offers an optimal range bonus to lasers, but rails were fit. At first glance the lack of a damage bonus makes this forgivable, until the rails are compared to pulse lasers. T2 pulses with Conflagration have almost double the tracking, 100 more DPS, and a better range bracket than rails loaded with Javelin. As well, the ability to swap ammo instantly would make lasers a far more flexible choice. Scorch would do just as much damage as Javelin out to 65km, a range at which the rails would need to load Spike to hit half as hard.

Then there is the rest of the fit. A large shield booster in the mids, unsupported by any hardeners whatsoever. Adaptive nano plating and the seldom seen layered plating in the lows. Combine the two for a laughably ineffective dual tank! A glance at his killboard shows this fit is not Morganga’s first foray into questionable tanking practices, though it is by far the most egregious. The scanning bonus modules do work with the probe launcher, though the scan speed increase and mix of T1 and T2 are a bit strange.

The microjumpdrive is another odd choice in that it adds little mobility, instead forcing the ship to slowboat everywhere unless the destination just happened to be exactly 100km away. The Sensor booster and signal amplifier compensate for the penalties from the cloak and indicate that locking targets rapidly was a priority, but why? Assuming the sentries launched as the ship died were Garde IIs, the fit would have an absolute max damage output of about 700 DPS at perfect skills. With a third of that coming from rails with poor application it’s hard to imagine this thing killing targets fast enough for lock speed to be important.

A drone bay full of repair drones is also more than a little baffling. Since drones cannot repair the ship that launched them, the ones showing in the wreck would only be useful for repairing other drones. Sentries and medium drones make for a logical choice for damage application at least; that part Morganga seems to have gotten right. Granted the choice of a damage mod for the underwhelming guns as opposed to the powerful drones is odd, but far less so than other choices made here. Like leaving 50 calibration unused and two rig slots open.

In fact about the only thing this fit could be said to do well is probe, but probe for what? Without analyzer modules it couldn’t access hacking or archeology sites. Without a salvager it would be unable to harvest melted nanoribbons which constitute much of the value of sleepers; without an afterburner or microwarpdrive even scooping the “blue loot” from the wrecks would have to be done at a tragicomic 88m/s. Nor does the story of its death do much to solve the mystery. According to Tyrant Scorn, who provided the explanation below as well as capturing the kill on video,

For several days we’ve been active in J160715. The people living there had previously smack talked us in local while fitting a full rack of Warp Core Stabs to their ships, so we decided it was time to teach those guys a lesson. We decided to camp the system and deny them content. This particular night the targets were all offline so we settled for PvE content and rid the system of the Combat Sites, when we deny content, we provide full service after all.

So, happy as larry we started doing the Combat sites when suddenly one of our scouts calls a Wormhole flash on the static “end of life” highsec connection. We all expected a random explorer and we figured he’d jump back into highsec since we had 1 Tengu, 1 Stratios and a Noctis decloaked in system and system is only 6 AU across, so everything coming in is going to see our ships on D-scan.

The incoming ship held cloak for the full 30 seconds, when he became visible, our scout called out a Nestor. Comms became silent and it all took us a few seconds before we realized that we’re talking SoE Faction Battleship. We all figured, he saw on D-Scan and he’s gonna jump out, but to our surprise the Nestor started aligning to the Sun and warped.

I ordered the fleet to pull drones and warp to a safe and cloak up as soon as possible and I proceeded to warp to the sun. When I landed I saw him at a 100km so I warped to the wormhole he came from at a 100 km and warped back the sun and as I landed he deploys [sisters core] probes and cloaked, but because I land right on top of him I decloak him and as soon as I got my scram on him I called in the rest of the fleet.

The Nestor didn’t put up much of a fight and as soon as we got a look at the killmail we understood why.

Clearly Morganga was blissfully unaware of the wonderful, friendly people a pilot is likely to meet in wormholes. He had several opportunities to notice the danger and run before getting caught, but instead he took his time about launching probes and cloaking. Further he launched PvE probes, useful only for finding ISK making opportunities or another wormhole connection, something very unwise in a clearly inhabited wormhole.

At the end of the day we will likely never learn the exact purpose Morganga fit this Nestor for. Maybe it was intended for some odd kind of mission running, or to do very low end combat sites. Maybe it was part of a bigger fleet, probing out and clearing sites before a dedicated salvager/hacker came in for cleanup. Maybe, as his name suggests, he had just smoked a blunt the size of a corn dog and was trying to figure out what the colors of a wormhole would taste like. The truth will probably have to remain mysterious; all the fit could do was probe, and probing is only a means to an end. Of course regardless of the utilitarian end intended, this Nestor did meet an end. The kind involving warp scramblers, several other dudes, and explosions.