War isn’t cheap, and nullsec war even more so. Alliance SRP can only cover so much in losses, and after those funds are used up pilots often have to dip into their own wallets to make up the difference. And war often brings vets back into the game as well, which raises the question of game subs. So when TEST leader Vily thanked his “hero pilots” recently, some of them were a little nonplussed over the ‘value’ of the rewards. That’s when Imperium leader The Mittani stepped in.

“I had a lot of stuff on my 2020 EVE bingo card,” the Imperium leader Tweeted, “but not ‘Vily rewards the ~heroes~ of Legacy with only half a goddamned timecard so they have to buy the other half to get any value.’ Gotta show these nerds how it’s done.”

In a separate ping to Imperium members, FC Asher Elias elaborated, “TEST did a morale post only one week into the war in which they listed the ‘Heroes of Legacy’ and gave them…. 250 PLEX. We thought that was a little cheap, to only give half a month of game time to your ‘heroes’ that they can’t even redeem without buying more themselves. So, soon these Legacy heroes will be receiving a full month of game time from The Mittani just to show them how you actually reward people.”

In response, one TEST pilot posted, “It has recently come to my attention that (The Mittani has) graciously gifted TEST Alliance Please Ignore pilots that have been hard at work in our combat campaign against the Imperium some game time, encouraging them to play and give more to their alliance and to the campaign as a whole. This gesture is greatly appreciated not only on behalf of myself, the pilots that received such gifts, TEST Alliance Please Ignore, but the wider EVE community.”

One Goonswarm pilot posted, “The Mittani shows Vily how a real Alliance leader rewards its heroes.”

Asher also said, “Since TEST has decided to copy three of our doctrines we have decided to copy their accolades and their parsimonious awards. We are establishing a ‘Hero of the Imperium’ award where deserving pilots will be sent 250 ISK! Nothing says ‘thank you’ like a very small award, thank you TEST for the idea, we’re happy to copy it.”

I had a lot of stuff on my 2020 EVE bingo card, but not 'Vily rewards the ~heroes~ of Legacy with only half a goddamned timecard so they have to buy the other half to get any value', gotta show these nerds how it's done~ #tweetfleet #eveonline pic.twitter.com/1zPiCStcHN

The Mittani also received a Revelation “Oasis of Faith” SKIN from the same TEST pilot. 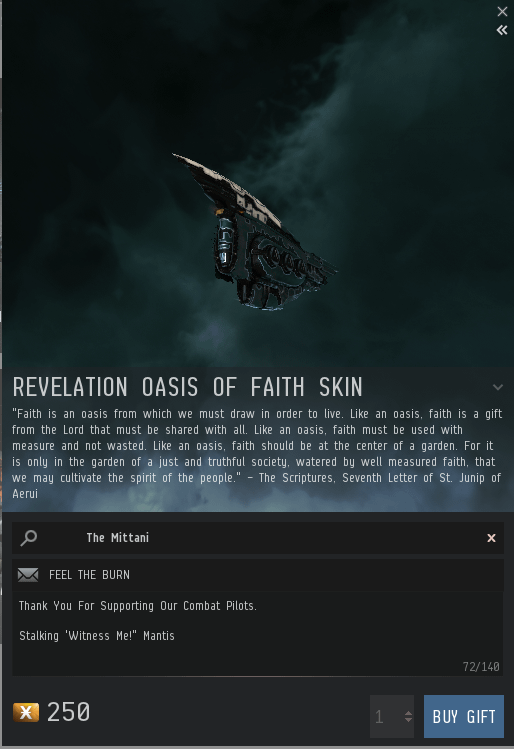