The EVE economy is “fairer” and players are finding it easier to connect with other players, according to CCP’s Q1 2020 Economy Review, which was posted to the Eve Online Dev Blog on June 26. The first of its kind report to be made public is a summary of the full review, omitting data considered “vulnerable” by developers, and is not linked to the Monthly Economic Report (MER).

Unlike the MER, which contains graphs of raw economic statistics, this review details three specific economic trends that reflect how players responded to in-game changes in the first quarter of 2020. These patterns help developers determine how future updates to the game should be engineered. While these internal reviews are conducted on a quarterly basis, this is likely the only one that will be made available to everyone. As CCP Convict explained, “[the devs] won’t be able to continue providing these on an ongoing basis since it’s quite a lengthy process to get this prepared for public consumption.”

With regards to the contents of the review, player input is emphasized as a critical part of the review’s creation and purpose. Much of the data cited in the review comes from the survey CCP sends to players each quarter, in which capsuleers “rank statements and situations in the game.” Additionally, the report states that sharing data on economic trends is part of “an effort to promote a better dialogue around the economy and macro in-game situation.” As such, the report aligns with many of the issues that capsuleers are responsible for bringing to the devs’ attention.

The first two trends discussed in the review correspond with CCP’s ongoing efforts to prevent the use of bots in Eve, and indicate that New Eden’s economy is becoming more equitable and fair. This is especially true for “smaller agents”, as the report states. The quarterly survey suggests that botting has become less of an issue for the average player, although nearly 53% of capsuleers who gave their input – down from 67% in Q3 2019 – continue to see it as a major concern. The report summarizes that while “botting is absolutely still a big problem… headway is being made in a meaningful manner and it is being noticed.”

This headway is good news for many. Capsuleers believe the economy has become more fair, with concerns over specific aspects of the economy – such as risk vs. reward and wealth distribution – dropping to 46.4% from 52% in Q3 2019. Mining has also become more profitable, as changes to mineral distribution during the first quarter of 2020 caused a dip in mining volume and a simultaneous increase in the price of ore. This is particularly beneficial to smaller-scale mining operations, which earn greater profit from heightened prices but aren’t significantly affected by changes that make large-scale ore harvesting more tedious.

A fall in the prevalence of botting has also driven down the ISK price of PLEX. Since May of 2019, the average price has dropped 43.5% from nearly 4.5 million ISK to the current 2.5 million, and shows signs of further decrease. 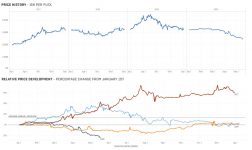 The supply of ISK in New Eden has also seen a steady increase, starting in late 2019. 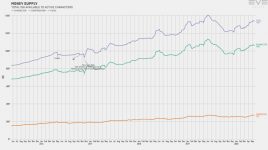 Falling PLEX prices and a rise in Money Supply have together made spending time in New Eden more worthwhile, as purchasing PLEX and other aspects of the game become more accessible to most players. The review concludes, “the cumulative effect is that in important segments of the game, the value of the labor hour seems to be increasing.”

The third major trend included in the review is that capsuleer connections are increasing – “the friendship machine is getting hotter,” the report states. Q1 2020 saw numerous updates designed to increase player-on-player interaction, including the Wormhole Chaos update, which increased the probability of player contact in wormholes, and the Loyalty to Lowsec update, which saw changes to Faction Warfare that increased activity in low security systems. The permanent introduction of Needlejack Filaments contributed to this increase as well.

The result of these patches is that players have found it 14.5% easier to find other players in-game over the past three months, and 8% easier to find content. Additionally, capsuleers found opportunities for player conflicts, including PvP and wars, to be 6.1% more abundant.

Another aspect of player connections, corporation membership, also saw improvements, with corp invitations and applications rising 26.7% and 36.6% respectively from the beginning of January to the end of March. CCP also provided some rare player activity statistics, noting that Eve’s Daily Active Users (DAU) was up 3.5% throughout Q1.

On the whole, this report is a positive sign. CCP was under no obligation to release this Economy Review, particularly after posting an MER just prior, but they took the effort to do so anyway in order to show us that the devs are taking player opinions into account. It’s good to know that the surveys players fill out are being acted on, and even better to see progress in-game. As the report concludes, “there is a lot of work to be done but player feedback indicates things are moving in the right direction.”

A capital fight has broken out this evening in Lantorn...